The FRIENDS OF PHILADELPHIA TROLLEYS, INC (FPT) was founded in 2003 when four Philadelphia traction fans met for the purpose of forming a non-profit organization which could work with the Southeastern Pennsylvania Transportation Authority (SEPTA) to promote and preserve some of the historic trolleys in Philadelphia. It was hoped at the time that the new organization would be able to form a relationship with SEPTA similar to that which exists between the MARKET STREET RAILWAY (www.streetcar.org) and MUNI in San Francisco. 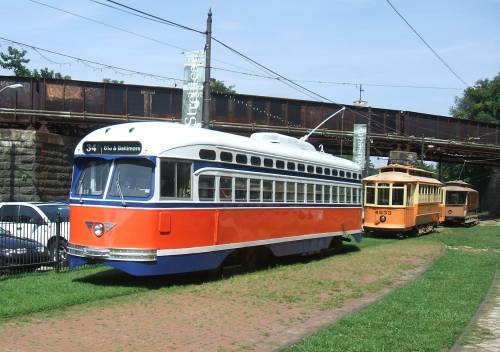 Our initial proposal to SEPTA in 2004 was to restore all electric PCC car 2168, which at the time, was part of SEPTA’s “historic fleet.” Under this plan, FPT would raise the funding to have the car overhauled at SEPTA’s Woodland Shop and repainted in its 1974 “Gulf Oil” colors. SEPTA would then have an historic PCC car to use for charters, publicity and public relations events. FPT would then continue to raise funds for the continued maintenance of the car on SEPTA’s property.

The management of SEPTA at that time (2004-05) informed FPT that there was no interest in historic trolley preservation and declined FPT’s proposal, so the Founding Members (Directors) decided to change the focus of the non-profit corporation. Starting in 2005, the primary goal of FPT would be to raise funding to for the preservation and restoration of trolley cars from the Philadelphia area that were in operating museums. Cars that were in private collections or backyards would not be eligible for funding.

To date, FPT has made nearly $200,000 in grants to established trolley museums for the preservation and restorations of trolleys from the Philadelphia area.