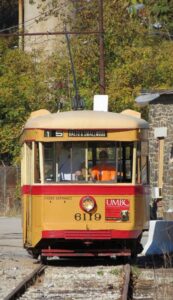 BALTIMORE, Md. — Friends of Philadelphia Trolleys will host their first “Twenty-Five Dollar Day” of 2022 at the Baltimore Streetcar Museum on Saturday, March 26, from 10 a.m. to 4 p.m.

What is Twenty-Five Dollar Day?  For a $25 donation, participants will have the opportunity to ride, photograph, and operate vintage streetcars from several generations. That’s right, you get to try your hand at running the trolleys!

• There will be no lunch break; we suggest that you bring a lunch.

• Cell phone use is prohibited while operating the cars.

• Masks are required inside the building and on the cars.

We look forward to seeing you there! 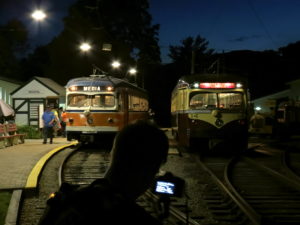 By Roger DuPuis and Bill Monaghan
Friends of Philadelphia Trolleys

WASHINGTON, Pa. — Over 50 guests enjoyed an opportunity to operate vintage Philadelphia-area streetcars when The Friends of Philadelphia Trolleys (FPT) and the Pennsylvania Trolley Museum (PTM) jointly hosted “Twenty-Five Dollar Day” on Friday, June 11 and Saturday, June 12, 2021 in conjunction with “Philadelphia Days” at the museum.

Their support enabled FPT to donate $2,000 toward restoration of Philadelphia Suburban Transportation Co. (Red Arrow) center door car 76, a 1926 Brill product that was acquired by PTM in 1990.

On Friday night, guests were treated to rides and photos with Red Arrow St. Louis streamliner cars 14 and 24, including multiple-unit operation of these vehicles in contrasting 1940s (14) and 1970s (24) paint schemes.

Saturday featured four Philadelphia cars from PTM’s collection out on the line for the event:

For their $25 donation, participants had the chance to ride, photograph, and operate these vintage streetcars under the guidance of PTM instructors. Scheduling and coordination ran smoothly, with participants having the opportunity to have at least two turns at the controls of a trolley along PTM’s scenic right-of-way through the Washington County countryside in western Pennsylvania. It is notable that many guests made the journey to PTM not just from the Philadelphia area, but also from New Jersey, Maryland and other parts of Pennsylvania, including Wilkes-Barre and — of course — greater Pittsburgh.

FPT would like to thank the volunteers at PTM for a wonderful weekend, as well as everyone that attended, Steve Barry for providing the flash lighting for night photos on Saturday night and Tom Pawlesh for arranging antique autos to pose alongside the trolleys.

Restoration of center door car 73 is progressing at PTM’s shop. Many of its rattan seats are badly worn or water-damaged. The restoration plan calls for the seats to be rebuilt and reupholstered with Naugahyde to match sister car 66 at the museum. The estimate for this work is $7,000, or approximately $250 per seat. The work will be done by a local contractor who specializes in antique auto upholstery.

For those who would like to help, donations of any amount are appreciated. Please make checks payable to:

Donations may also be made via PayPal by visiting our JOIN FPT! page, where visitors will find a donation button. 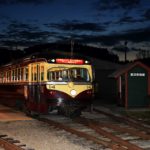 Bill Monaghan captured this stunning image of car 14 at twilight. 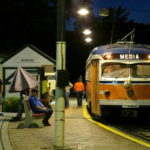 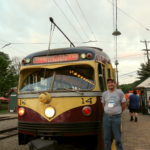 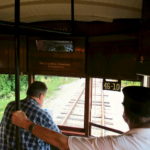 Michael Trosino takes a turn at the controls of PRT 5326. 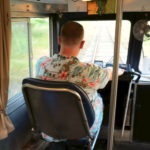 Roger DuPuis is seen at the controls of PTC/SEPTA 2711. 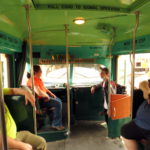 Car 14 is seen prior to Friday night’s multiple-unit trip. 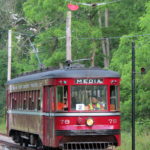 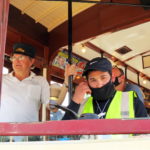 Marcus Idell awaits departure at the helm of 5326. 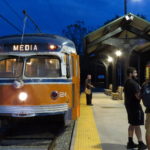 Bill Monaghan, Marcus Idell, E. Marquise Sanders and other guests chat at the Fairgrounds platform following some twilight photos of Red Arrow 24 and 14. 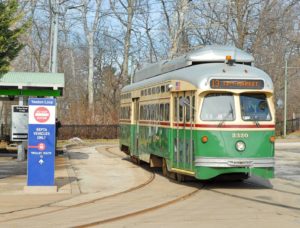 PHILADELPHIA — Friends of Philadelphia Trolleys (FPT) will be sponsoring a PCC-II charter in conjunction with the East Penn Traction Meet on Sunday, May 19, 2019.

The charter will depart SEPTA Elmwood Depot at 11:00AM and will return around 3PM the fare for the trip is $45. To reserve a seat, please send a check for $45.00 made out to FPT, Inc., and mail to: FPT c/o Harry Donahue, 103 Mulberry Court, Morgantown, PA 19543. All proceeds will go to PTC Peter Witt 8042 at the Pennsylvania Trolley Museum. Need more info? Contact: Bill Monaghan FPT2799@comcast.net