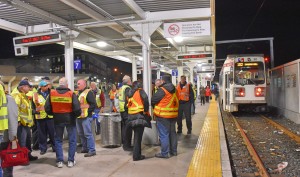 In the late 1990s, several of the Trolley Museums in the Northeast began to hold an annual winter get-together for the people who volunteer at the various museums. The event has been held on a Friday-Saturday in February when the museums are normally closed to the public. The host museum would usually have a pizza party on Friday night along with guest operations. On Saturday, there would be more guest operations along with a formal lunch or dinner with a slide or power point informative program.

The idea was to foster a spirit of fellowship and cooperation among the different museums. One of the benefits of these informal communications was that parts and various equipment could be located and traded between the various museum shops.

This year, due to a variety of factors, none of the museums was able to host the event.

By early December it looked as if there would be no Winterfest for 2017. 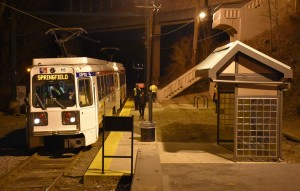 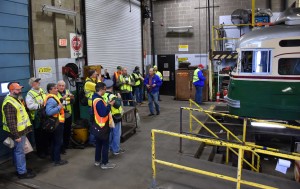 Then, one day in December, Bruce Wells of the Pennsylvania Trolley Museum (PTM) called Bill Monaghan with an idea: Could FPT put a Winterfest program together in the city of Philadelphia? Bill immediately contacted Harry Donahue and Matt Nawn. Could a program be put together on such short notice? Obviously, there could be no “guest operations” and the program would need the cooperation of SEPTA.

It was decided to build the event around SEPTA’s eight broad gauge trolley lines, six in the City Division and two in the Suburban Division. With the help of Ed Springer of SEPTA, FPT was able to arrange a Friday night charter on the suburban Media and Sharon Hill lines (former Red Arrow routes) using an MU Kawasaki train. On Saturday there was a five-hour charter on the City side using a two-car MU Kawasaki train. The city cars are very rarely used in MU service. Tours of both Elmwood Depot and Woodland Heavy Repair Shops were included with the charter. 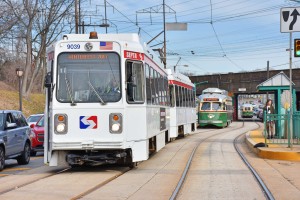 The two-car City Division charter and a Route 15 PCC-II car are held up by traffic outside the Philadelphia Zoo, Feb. 18, 2017. (Bill Monaghan photo.)

Following the charter, there was a tour of the Newtown Square Railroad Museum where former Red Arrow “St. Louie” Streamliner #23 will be restored as a static display just about one hundred feet from West Chester Pike where it once ran on the West Chester Line. On Saturday evening, FPT hosted a pizza dinner at the Newtown Square Municipal Building (thanks to the efforts of John Nawn). Matt Nawn gave a presentation about Friends of Philadelphia Trolleys and retried SEPTA engineer Russ Jackson presented a program on the development of SEPTA’s Kawasaki light rail cars.

Although the event was put together on very short notice, we had a total of 89 people registered and everyone appeared to have a great time. A committee was formed to look into which museum will host Winter Trolleyfest for 2018.

FPT wishes to thank SEPTA for their assistance in making this a successful event.