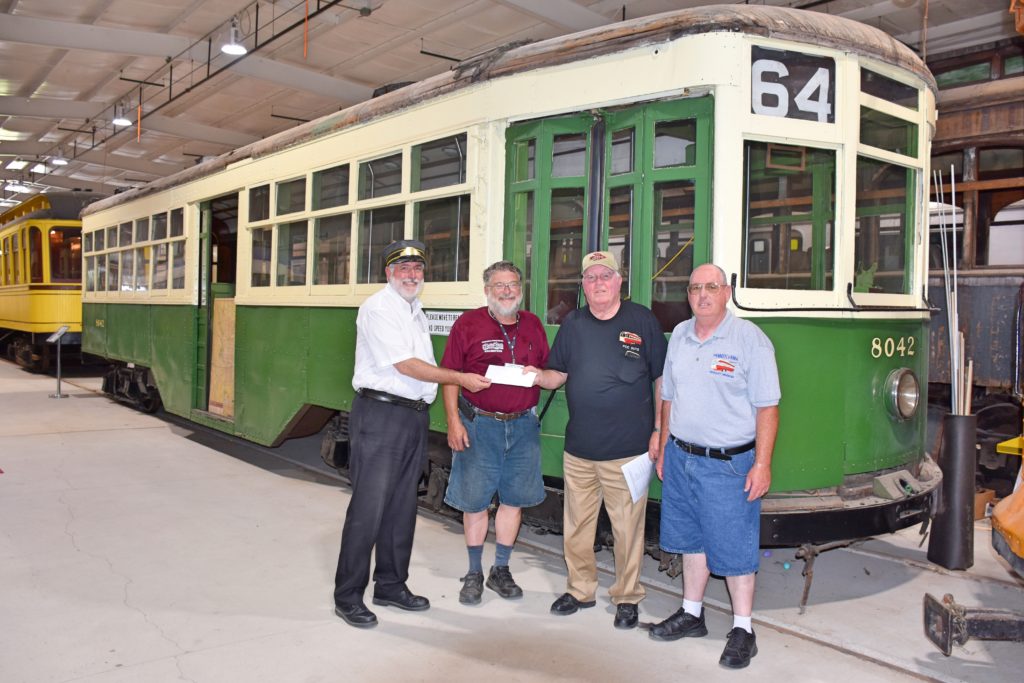 Restoration of a classic Philadelphia “80 hundred” streetcar is set to get underway, and you can help Friends of Philadelphia Trolleys support this worthy project.

The museum’s Board of Trustees has approved moving ahead with front platform work this fall. Designated Phase I of the 8042 project, the effort will require approximately $40,000. Thanks to individual contributions, PTM has raised $33,000 — donated or pledged — toward the work.

During Washington County Fair Week in August, FPT Directors Bill Monaghan and Harry Donahue presented PTM Executive Director Scott Becker with a $3,000 grant for 8042 through the WCCF Gives program. That will enable FPT’s donation to be matched under the county’s program, as also was done with FPT’s 2016 grant. 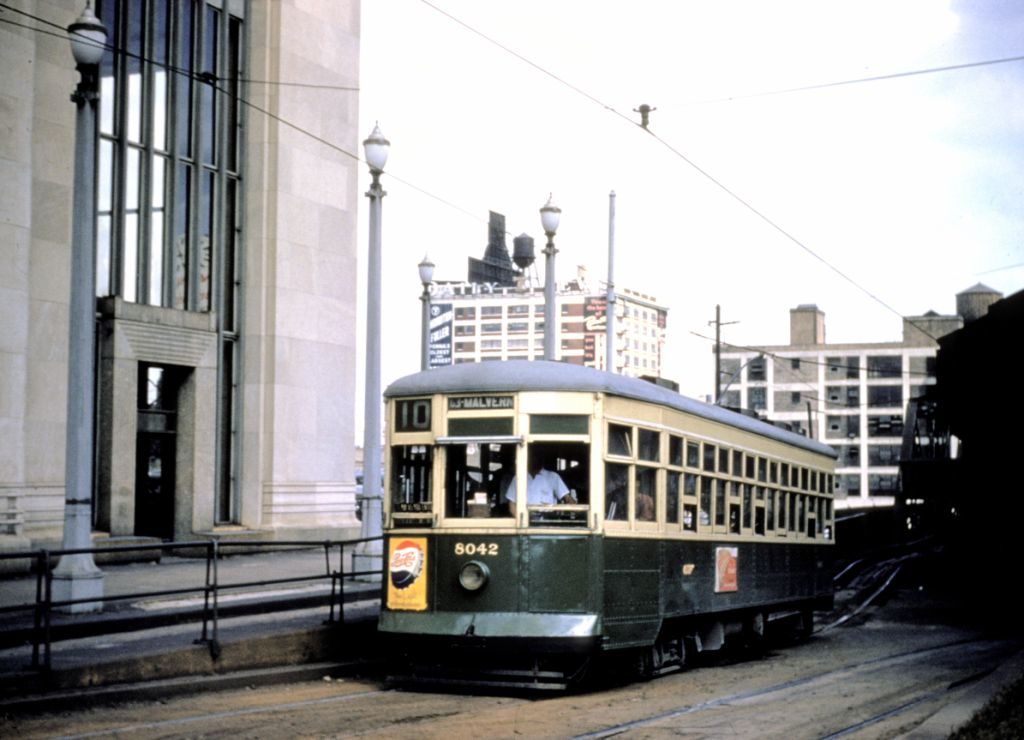 PTC car 8042 is seen westbound at 30th Street on Subway-Surface Route 10 in the early 1950s, before the Market Street tunnel was extended under the Schuylkill River. (Courtesy Harry Donahue.)

But change was in the wind. On Jan. 1, 1940, PRT, which had been in receivership for several years, was reorganized into the Philadelphia Transportation Company (PTC). In an effort to create a more modern image for PTC, the management began an overhaul program for the “eighty hundreds,” as the 8000s were called in Philadelphia.

The cars were equipped with new herringbone gears and braking systems, leather seats, improved interior lighting and a brighter green and cream paint scheme. Imitating the system’s new PCC cars, PTC added a set of painted headlight wings and for publicity purposes, dubbed the rebuilt cars “Paintliners.” The plan was to overhaul all 535 cars, but stopped when the U.S. entered World War II, as PTC’s shops increasingly had to concentrate on overhauling many older cars — which had been in storage for years — to meet anticipated wartime traffic demands.

In the end, about 270 of the “eighty hundreds” were rebuilt, and PTC referred to this class of cars as Single End Rebuilt (SER).

SER 8042 was assigned to Callowhill Depot when it came out of Kensington shops in September 1941, where it was used mainly on Subway-Surface routes 10 and 38. When the SER class was displaced in the subway by PCC cars in September 1955, car 8042 was transferred to Southern Depot for continued use on routes 17 and 32, the last non-PCC trolley lines in Philadelphia.

In March 1957, the car received a complete exterior re-paint, thanks to a political battle between the city and PTC, which was by then under the control of pro-bus National City Lines.

Philadelphia Mayor Richardson Dilworth had demanded that Douglas Pratt, whom National City Lines had brought north from the Baltimore Transit Company, soon after taking control of PTC, “do something about the appearance of those old trolleys on Market Street.”

Pratt — who had been installed as president of PTC, and was in the process of eliminating 33 trolley lines in 31 months (1955-58) — actually ordered that 15 of the 58 SER cars at Southern Depot be completely painted, of which 8042 was one.

The car’s salvation came about partly thanks to an amusing incident soon afterward.

In April 1957, a group of railfans chartered 8042 for a fan trip. The group was specifically told not to
travel west of 17th Street on westbound Susquehanna Avenue as the power had been cut. They did just that, however, and 8042 coasted to the first railroad underpass and waited for a tower truck to come to its rescue. The truck towed 8042 to the closest PTC depot —  Ridge, where a number of 8000s had been stored.

Routes 17 and 32, the last Market Street trolley lines, were converted to bus in December 1957, but a number of cars were kept at Ridge into 1958 on the slight chance that the city or the Pennsylvania Public Utilities Commission would rule that the trolleys should be restored to operation. Indeed, there was some political pressure to bring them back on Chestnut and Walnut Streets, but to no avail.

In March 1958, three cars were sold. Car 8530 went to a private family in central Pennsylvania, where it still resides. Cars 8042 and 8534, meanwhile, were sold to Bob Borzell and Earl Johnston, who were connected with a fledgling trolley museum in Tansboro, N.J. The two cars were moved to Tansboro, where car 8042 ran under its own power in June 1970 at Tansboro with the late Ed Torpey at the controls.

Sadly, the museum in Tansboro faltered and the collection was moved to Buckingham, Pa., under the name of Buckingham Valley Trolley Association. In the early 1980s, the collection moved again, this time to Penn’s Landing in Philadelphia.

From Penn’s Landing, 8042 and the BVTA collection went to Scranton, where several of the cars run
today as part of the Electric City Trolley Museum.

In 2005, the Electric City group offered 8042 to the Pennsylvania Trolley Museum. This has proven to be an excellent decision since both 8042 and PTM are broad gauge, thus avoiding the huge expense of regauging the car’s maximum traction trucks.

PTM boasts a collection of nearly 50 cars — including a rich assembly of Philadelphia-area trolleys — with more than 600 members worldwide, 150 active volunteers, and over 30,000 visitors each year.

The plan is to move 8042 into the shop this Fall and to completely rebuild the front platform from its knees to its bonnet. This will include new corner and center posts, platform sidewall and operating equipment.

Keith Bray, who has done a number of beautiful restorations at several of trolley museums in the Northeast, will lead the project, along with volunteers to complete the restoration.

Phase II of the project will include the roof work. Thanks to earlier FPT donations, the new canvas and the roof ventilators have already been purchased.

Phase III will include a new interior headliner, and new doors.

Editor’s Note: Our sincerest thanks go to Ed Springer, Ed Casey and David Horwitz for providing
information on the car’s history, which previously appeared in the Spring 2016 issue of The Streamliner, FPT’s newsletter.