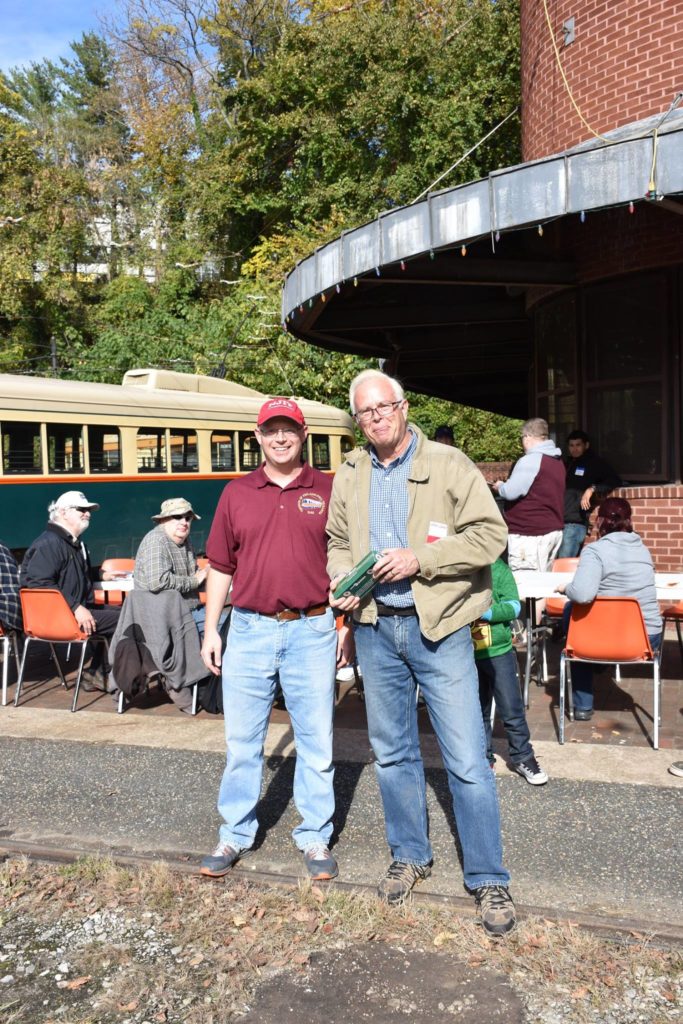 Friends of Philadelphia Trolleys’ annual $20 Day for 2017 was a success, drawing a crowd to the Baltimore Streetcar Museum on Saturday, Nov. 4, 2017. It helped raise money for both organizations and offered a chance to recognize two volunteers.

As always, the event also offered visitors a chance to operate preserved equipment at the museum, including Philadelphia PCC 2168, which was restored in 1973 colors and has been kept running in large part thanks to FPT volunteers and donors.

In separate ceremonies during the day, Mike Lawson and George Rich were honored.

Mike, you may recall, offered invaluable help with the interior restoration of PCC 2743, which operates at the Rockhill Trolley Museum in Huntingdon County, Pennsylvania. Mike’s efforts included professional quality refurbishment of several fittings inside the car, including the operator’s heater grid, transfer cutter and more. Mike was presented with an HO scale model of 2743.

George, a volunteer who has been part of many FPT maintenance visits to museums far and wide, also is a friend to many. He recently retired from SEPTA, a watershed moment that was celebrated with a homemade cake during Saturday’s festivities at BSM.

We are happy to report, meanwhile, that $20 Day raised $870 to support the respective missions of FPT and BSM. For more photos from the day, check out FPT’s official Facebook page.

NOT ONLY THAT
Just in case you hadn’t heard, FPT will again be hosting a New Year’s Eve trolley charter in Philadelphia this December 21. More information can be found on the FPT 2017 New Years Trip Flyer. 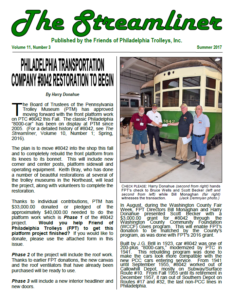 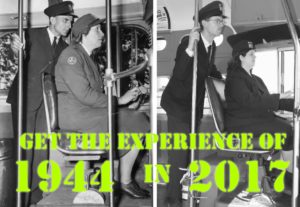 Philadelphia Transportation Co. PCC 2743, one of FPT’s recent restoration projects, is expected to take part in a living history event this weekend at the Rockhill Trolley Museum in Central Pennsylvania.

On Sept. 9, the museum will host a new World War II living history event to put trolley passengers in the middle of the sights, sounds, and tension of homefront America in 1944. Enjoy the sounds and get up and dance to great 1940s swing music played live by The Big Band Sound, Inc. Experience exciting moments Pennsylvania trolley history, such as when trolleys served the war effort, when women first ran the trolleys, and even when fully armed soldiers guarded city transit vehicles.

Admission to event is $8 per adult, $5 for children 12 or under, and infants are free. Admission includes live swing dance music performance, trolley rides, a chance to interact with history re-enactors, and more.

In addition to regular trolley rides, there will be limited seating on three special trolley rides throughout the day, at 11:15 a.m., 1 p.m. and 3 p.m. These rides will have combat-equipped Allied soldiers guarding the cars, so passengers should be advised that they may hear gunfire nearby on these special trips. Not recommended for young children, and some walking over gravel and stepping on and off of trolleys is required. Keep an eye out for enemy activity as you ride, and meet the trolley museum’s collection of military veteran rail equipment.

You can reserve a seat for the special ride on the museum’s website, www.rockhilltrolley.org. Note that there is a fee for online reservations.