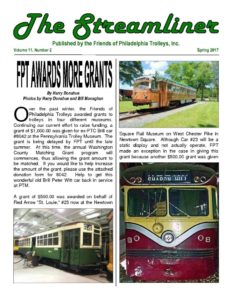 The Spring 2017 issue of The Streamliner has arrived! Features include: 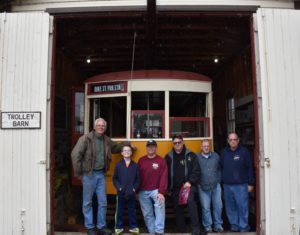 While FPT’s focus is and always will be on Philadelphia trolleys, our volunteers and friends also share their personal time with other museums that work to preserve our traction heritage, with a focus on cars connected to Pennsylvania and surrounding states.

The Manheim Historical Society in Lancaster County, Pa., operates a restored 1926 Birney car that was built by Brill in Philadelphia, and operated for Lancaster’s Conestoga Traction Co. until 1947. The car is housed in a small purpose-built barn, and runs along a short stretch of track next to the society’s restored 1881 railroad station in the Borough of Manheim.

Birney 236 was rescued by the society in 1990 from the Pennsylvania Historical and Museum Commission. While its line isn’t long and the traffic isn’t heavy, the 91-year-old trolley does need some care and fine-tuning from time to time. FPT founding member Matt Nawn has lent the society his expertise in recent years.

On May 13, Matt and several other friends visited the society’s carbarn to perform some work on 236 prior to the start of the 2017 season. Together with Matt were Andrew Nawn, Bill Monaghan, Mike Lawson, George Rich and Roger DuPuis. The society’s John Eichelberger was on hand with a rain canopy, tools and supplies this damp Saturday, while Kate Eichelberger made sure everyone had a warm meal inside the beautifully restored station building.

The car’s controllers, motors, brake valves, breaker boxes and doors all received some attention, with the inside windows getting a good cleaning.

The trolley operates from 1 to 4 p.m. on Sundays, weather permitting, between June and September. For those who would like to come out for a visit, Matt will be operating on June 10, and Roger on June 11, during Manheim Heritage Days.