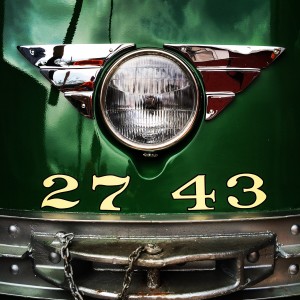 FPT’s latest edition of “The Streamliner” is available here: the-streamliner-fall-2016. Highlights this month include:

If you’re like us, you can never get enough of vintage traction. This year has brought much action on the restoration and charter front, with so much more to come. 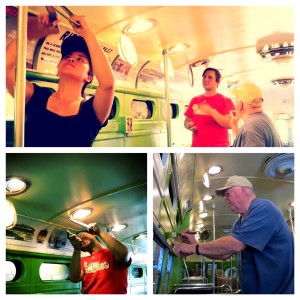 Harry Donohue, Bill Monaghan and many friends have been busy working on the restoration of PTC PCC 2743 to its circa-1960 colors at the Rockhill Trolley Museum. You can read about the project’s background, in detail, here, as well as in the current newsletter and in future updates on this site.

As of now, much of the interior has been repainted from the two-tone SEPTA GOH blue of the 1980s into the two-tone green and cream of the PTC years. The photo at left shows some of that work underway recently.

Several seats also have been reupholstered in a rich brown material appropriate for that era. So far, 12 double seats are paid for, and FPT continues to raise money for the rest to be re-covered.

Interested in donating or helping with the work? Contact us via this site, or by emailing FPT2799@comcast.net. The cost of a double seat is $235, for a single seat the price is $195. 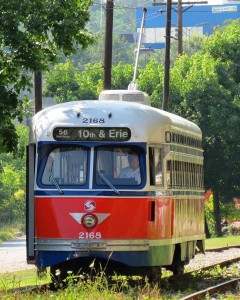 In a time-honored tradition, many FPT members and guests rang in 2016 aboard a chartered suburban SEPTA Kawasaki car, setting the tone for a year filled with fun events to bring railfans together and raise funds for FPT’s mission. Summer may be flying by, but there’s still plenty of time to join us for fan trips and more.

As you’ll find on our new upcoming events page, FPT has a charter coming up this September in Pittsburgh, followed by in November by a special FPT gathering at the Baltimore Streetcar Museum.

Check back often for information about FPT’s activities, including newsletters, photos, special reports and updates on the progress of our fundraising and restoration projects.